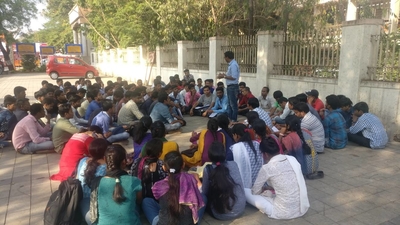 There are several challenges faced by SC and ST students in their access to higher education. In terms of accessing scholarship, students experience discrimination at several levels. Starting from the application, many applications from the SC/ST students are not accepted and are denied admission stating reasons of insufficient documents. Moreover often the process of filing application is often so lengthy and tiring, that many students lack the resources in doing so and there are no mechanisms to address to smoothen out these issues. Adding to it, there have been certain policy level changes in terms of reduction in allocation, number of scholarship, linking scholarship to aadhar making the Dalit and Adivasi students more vulnerable in terms of the position in the educational institutions.

Even after Supreme Court’s judgement, that Aadhar should not be made mandatory for availing      government welfare schemes, Government of Kerala, in circular dated 19/12/2012 made it mandatory. Since then department withheld applications of the students who didn’t provide aadhar linked account details. The list of these students who couldn’t avail the scholarship due to non-compliance with Adhar was published in the website with district wise details.

In Kerala due to this issue of linking Aadhar number with the scholarship distribution around 20000 Dalit and Adivasi students had been denied scholarships for more than two years. After obtaining this information the state team met the Minister and Secretary SC department and Directors SC and ST department for his immediate intervention. The team also filed number of RTI application to verify the information, further also issued a press note stating gross violations. All major newspapers and online portals carried this news in detail.  Later the Director SC department informed that pendency of scholarships due to Aadhar has been brought down to less than 1000 students. Therefore this campaign has benefited at least 19,000 Dalit and Adivasi students in the state of Kerala.

Your ticket for the: Case study from Kerala