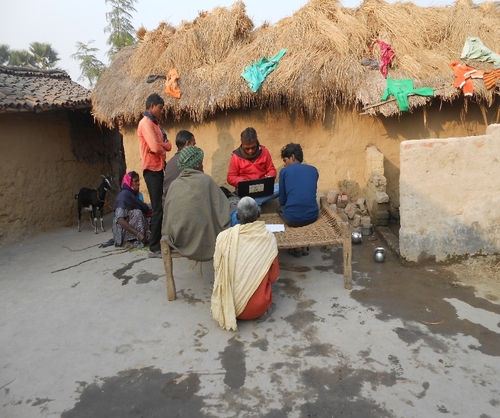 The Planning Commission, Government of India, has been stressing from time to time to frame special schemes for the upliftment of the Scheduled Castes. Special schemes were required to be framed for the villages which have significant Scheduled Castes population. Keeping in view the guidelines of the Planning Commission, Mahatma Gandhi Gramin Basti Yojna was launched in the State of Haryana. This scheme is aimed at benefiting the poorer sections of the society. Under this scheme, the State Government has decided to allot free residential plots to the eligible SC families, Backward Class (Category-A) families and BPL families in the villages. This scheme was initiated in 2008-09 by the Govt. of Haryana.

The beneficiaries from the Village Naultha, Block – Israna, District Panipat, Haryana had applied for the scheme in 2008.  More than 42 acres of residential plot was allotted by Haryana government with the value of Rs. 2.5 Cr. per acre among 464 Dalit families in 2014.However this land was encroached and captured forcefully by upper caste ‘Jat’ community. DAAA along with affected families filed a case with the State Human Rights Commission, District Commissioner, Minister for Housing, Govt. of Haryana, Block Development Officer (BDO) and to the local police. They formed a committee of 22 members consisting of the families for whom land was allotted.  Complaints and memorandums were submitted to SP, District Magistrate and political leaders. Since 2014 the team has been continuously engaged at different levels regarding this issue. However with continuous efforts, in May 2017 the court passed an order in favour of SC families. This has been one of the biggest achievements in terms of access to land for the Dalit communities.

Though even after the judgment in favour of Dalit families, there have been continuous attempts from the upper caste ‘jats’ to capture the allotted land. They even filed a case in State High court against this judgment; however the High Court’s judgment was also in favour of the Dalit families. The District Commissioner of Panipat district gave the ownership of the land to the beneficiaries. Rural Development Authority along with other departments has been entrusted with the development of basic infrastructure facilities such as water, electricity, streets and construction of drains.

Your ticket for the: Case Study from Haryana