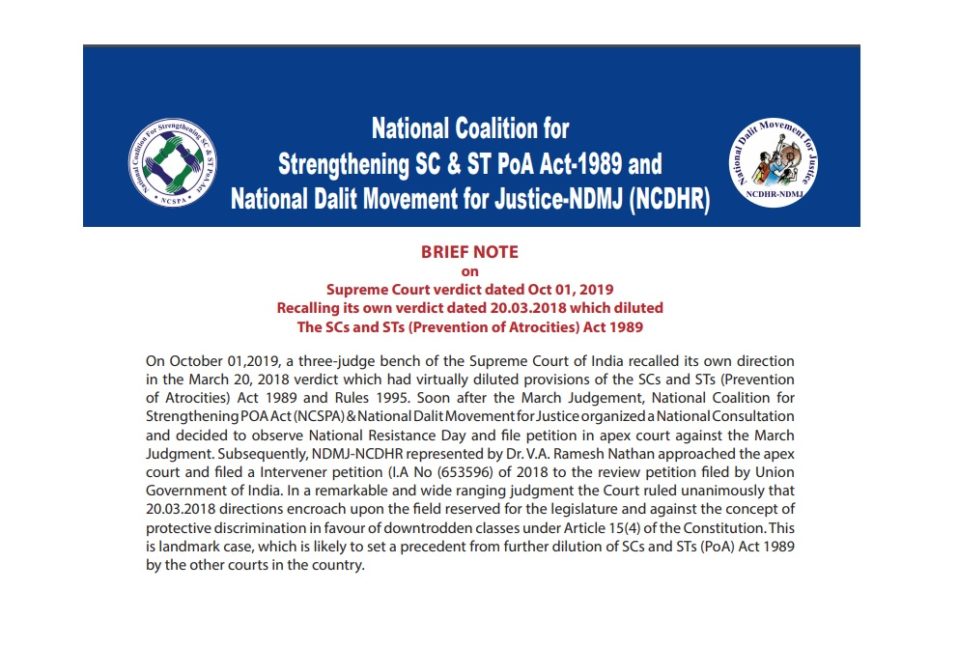 On October 01, 2019, a three-judge bench of the Supreme Court of India recalled its own direction in the March 20, 2018 verdict which had virtually diluted provisions of the SCs and STs (Prevention of Atrocities) Act 1989 and Rules 1995. Soon after the March Judgement, National Coalition for Strengthening POA Act (NCSPA) & National Dalit Movement for Justice organized a National Consultation and decided to observe National Resistance Day and file petition in the apex court against the March Judgment. Subsequently, NDMJ-NCDHR represented by Dr. V.A. Ramesh Nathan approached the apex court and filed an Intervener petition (I.A No (653596) of 2018 to the review petition filed by Union Government of India. In a remarkable and wide-ranging judgment, the Court ruled unanimously that 20.03.2018 directions encroach upon the field reserved for the legislature and against the concept of protective discrimination in favour of downtrodden classes under Article 15(4) of the Constitution. This is a landmark case, which is likely to set a precedent from further dilution of SCs and STs (PoA) Act 1989 by the other courts in the country.

Follow the link for a full copy of brief note: http://www.ncdhr.org.in/wp-content/uploads/2019/12/National-Coalition-for-Strengthening.pdf