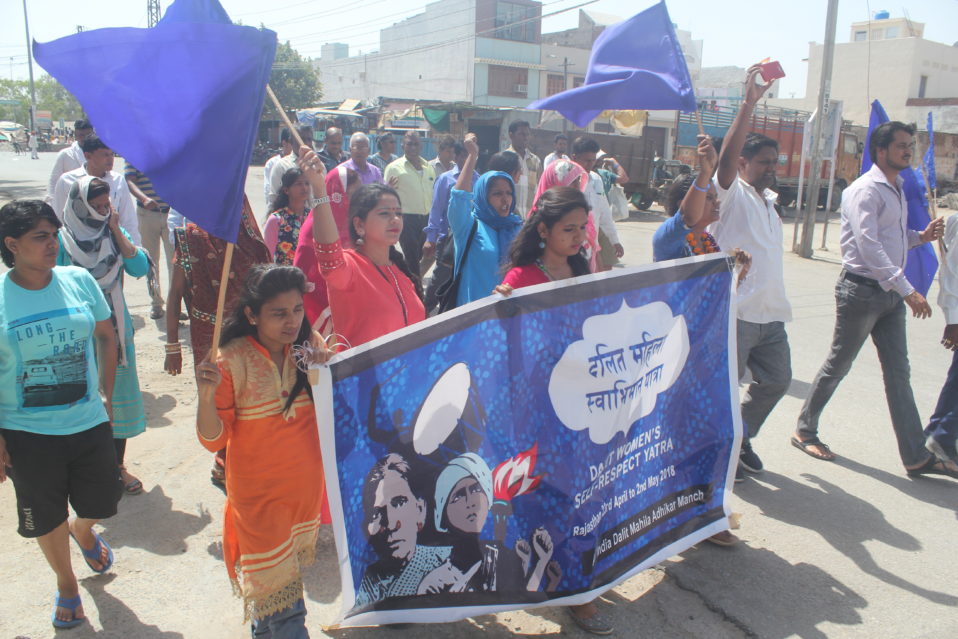 Dalit women envision a world that is equal, just and offers security and happiness for all. We
believe that, in such a world, we will have equal access to resources, right to life and dignity.
Our resistance movement is defined by this vision with a dream of leaving behind a better place
for our children.
All of our struggles are inter-related and hence our freedom(s) are also connected.
Dalit women have the lived experience of being isolated and yet harmed the most. We are
perhaps made most invisible by the world around us, with an intention to further subjugate and
silence us.
It is in this context that as Dalit women, we understand the pain and struggles of transgender
communities, who are often pushed to the margins and bear the brunt of discrimination and
violence.
In reality the frame of ‘intersectionality’ is not merely an ‘intersection’. It actually resembles a
deeply intricate web that weaves together a myriad of vulnerabilities. The core of the various
forms of oppressions lies deeply buried in caste-patriarchy that is sanctioned by Brahmanism.
As Dalit women, we experience the lines of purity and pollution ascribed by the caste hierarchy
in the society that we live in. Similarly, we are able to understand the notions of ‘impurity’ placed
on transgender people. The former are impure because of their caste and the latter because
they do not fit into the so called ‘purity’ of the caste supremacist gender-binary that values only
bodies that can perpetuate it through reproduction and labour.
Further, its actually very simple. Trans folks were listed as a caste category since the colonial
census records. The layers of multiple forms of oppression are only further exacerbated for a
Dalit trans person. Intersectionality is actually a complex web! Understanding the core of the
caste-patriarchy endorsed by the shastra’s makes it a lot simpler to decipher.
As Dalit women, we stand with the Transgender community demanding for right to life,
livelihood and dignity. We are not just allies, but part of this movement to completely dismantle
every structure growing out of cis-brahmanical-patriarchy.
Post independence, none of the Governments has made any sincere effort to transform the
lives of the marginalized communities; Dalit women and Trans people included. Whether is it
exclusive budget allocations, special legislations, Government schemes or programmes, we
have only received the crumbs under the table. There is ample evidence to show that this kind
of piecemeal approach to address our deep-rooted problems has served nothing to us.
Hence, we wonder why is this Government in such hurry to push the Trans Bill 2018? A Bill that
the community is outrightly rejecting! A Bill that the community is tearing up and actually burning
to ashes!
As Dalit women, we know only too well about the devious ways in which the system works. The
system that is deeply entrenched with caste-patriarchy will always create policies and
programmes that are ‘designed’ to fail us and even oppress us.
The Transgender Bill 2018 is just another one of these tactics of this conspiracy.
At this moment, we join our voices with rage to protest against the Trans Bill 2018 in its current
form and demand for a re-draft with inputs from the members of the community.
Jai Bhim.

Your ticket for the: Dalit women stand with the struggles of Transgender communities in India.