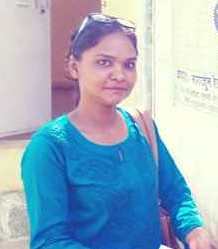 Gayatri sonker is a state coordinator of Madhya Pradesh. She was born and brought up in Allahabad, Uttar Pradesh in a middle class family. She was the third child among five. Since her  student days she was interested in music and sports. She also played hockey at the district level. After, a decline in financial resources that the family faced,  She shifted to Bhopal in search of employment with the support of her sister who is also an activist. In 2011, she came in contact with NCDHR team and started working in Raisen district of Madhya Pradesh. She has created a network of Dalit and advise women with the support of AIDMAM. In Noorganj village of Obdullaganj block, Raisen district, barbers refused to cut the hair of Dalits. She  raised this issue with her team and agitated against this, resulting in an end of this boycott. They got government officials to construct a road in a dalit colony under the scheme of SCSP/TSP budget in 2013. She also lobby with the SC/ST commission, womens’ commission and gram sabhas to intervene in atrocities.

Your ticket for the: GAYATRI SONKER